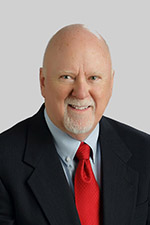 Donald K. Brown, Jr.
Counsel to the Firm
(Admitted in Kentucky and Tennesee)


In 2020 Donald K. Brown Jr. was honored as one of the first five attorneys named to the inaugural class of the "Kentucky Trial Lawyers Hall of Fame" by The Kentucky Trial Verdict; Don was also recently listed as one of the "Top 50 Lawyers in Kentucky" and is listed in the 2020 edition of America's Best Lawyers."

Don Brown is an experienced and exceptionally prolific trial attorney whose primary practice area is insurance defense litigation, with an emphasis in medical malpractice defense as well as nursing home/long term care defense. Don has been licensed to practice law since 1980. He has successfully defended numerous professionals and companies from claims seeking millions of dollars in high-profile suits. In the past twenty years, Don has had over 55 verdicts, placing him in the top ten most prolific attorneys in Kentucky for that period. At the end of 2019, Don was one of only 5 Kentucky lawyers inducted into the first annual Kentucky Trial Court Review Trial Lawyer Hall of Fame. He has also won several state and national awards and recognitions and he is a well-known seminar speaker on the subject of medical malpractice.

Outside the office, Don enjoys golf and music. He and his wife, Cheryl, enjoy traveling and spending time with their children and grandchildren.

Don was featured on the front page of the Courier-Journal newspaper on January 14, 2011.